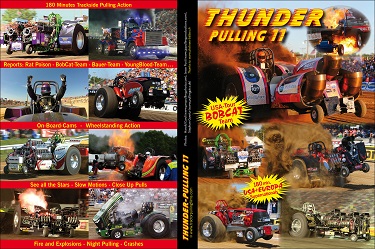 The new released part of the "Thunder Pulling" series is on deck. Filmed with professional, High Definition camera-equipement, and available on DVD and also BluRay-Disc.
High quality in Picture and Sound. So you feel the noise and earthshacking blast when the Pulling Machines are thundering down the track.

With almost 3 hours of playingtime, Thunder Pulling 11 features all the competitors, teams and tractors from the american and european Pullingseason 2015.

The new film starts up with the SUPER NATIONALS of Pulling, in PULLTOWN USA - Bowling Green Ohio.
By far it is the biggest, most exciting and most spectacular Tractor Pull in the world.
The organisation run 2 Tracks side by side and there are over 50 Tractors running in some classes. All the Stars, big names and "underdogs" of american pulling are there and battle for the
"Ring". Every team is well prepared and runs on the limit. Great Pulling Action is garanteed. Pulling Action is going on from Friday noon until Sunday evening. also under the lights in the night.

This year the netherlands "BOBCAT TEAM" from the Boer family toured the USA and run the NTPA and PPL pulls.
Berry and his father Bertus Boer were very successful with their wonderful, homebuilt "Bobcat" Mini Machine.
We begleiten the team the whole weekend, with interviews, great pulling action, up and downs, like their crash at the Pullingevent in Hillsboro, Nebraska. But finally the Boers team made it on the podium and won the PPL-Championships. The first european team winning it. Congratulations to you All.

The competiton was filmed right beside the 2 Powertracks, close on the sideline.
You hear the noise, you feel the vibrations, you can smell the dust and smoke. It is, as you would be there live on stage.....
All the action is captured from Start to Finish and from a lot of different camera positions, with slow motions and some good music.
Great Onboard footage gives an exciting view, mounted on the pilots helmets, rollcages, engine hoods and sleds, right behind the Tractors.
Of course there are a lot of teamreports, interviews and background infos on Thunder Pulling 11.
The reported drivers explain their mechanical innovations and new releasments.
Here are a view of the teams introduced:

Unlimiteds and Modifieds:
Screamin D Pulling team - Juck Knapps wonderful Unlimited, with the huge, one of a kind, 18-71 blowers, over 3000 horsepower per motor.......closeup footage, roaring engine sound.
One engine exploded at the finish line, filmed also with the onboard cam....
Youngblood Pulling team -  Brian Shrameck and his son Braden run a six engined Unlimited Modified and 2 Diesel Super Stocks, the brand new Acgo Allis "The Legacy" and "Youngblood".
Green Streaks Pulling team -  Steve and Gregg Boyd switched from Pro Stock to Unlimited Mod. and they run 2 multi-engined Monsters
American Thunder Pulling team - Bill Voreis pulls over 40 years and pilots his new "American Thunder" 5-engined Modified.
Bollinger Pulling team - Steve and Tom Bollinger are one of the few successful Allison pullers left in the States. The brand new Money Pit is powered by 3 V12-Allisons with a new frame......
Rat Poison Pulling team - Brian Diekman built a one of a kind, innovative frame for his new Rat Posion, powered by 2 Allisons.
Mr. Twister Pulling team - Scott Tedder is one of the strongest Modified competitor. He manufactures pullingframes, like "Four No Hemi" from Italy....
..............

BOBCAT team - Berry Boer pulls in the tuffest Mini competition. The europeans are on the top field of the huge class, where almost everybody can win.
Berry and his father Bertus gaves us great interviews, reports and performed actionpacked pulls.NoMercy team -  Bruce and Tiger Slagh experience with a new frame-construction, sitting almost on the engine at their beasts.
...........

also featured are the BLOWN and DIESEL POWERED FWD-TRUCKS and the wheelstanding TWD-Trucks with their crazy, funny car bodies.

This year we toured to the following events:
In Germany to FÜCHTORF and KRUMBACH
In Austria to RAPPOLZ
In Zwitzerland to KNUTWIL

All those Pulls were very exciting with a lot of international starters and Pulling Tractors from all over Europe.
Many new Teams performed this year at the european scene and a lot of action was on the Tracks.
With a teamreport from the german Super Stock team Kaiser and their one of a kind John Deere.

ORDER YOUR DVD OR BLURAY OF "THUNDER PULLING 11"  online today with PayPal.
Press the button "Add to Cart" on top of the page,  and pay with PayPal. Or email to gerald.wallaberger@drei.at
Price is Euro 19,90 (DVD) or Euro 29,90 (Bluray) plus Euro 5,00 postage - THANK`S.